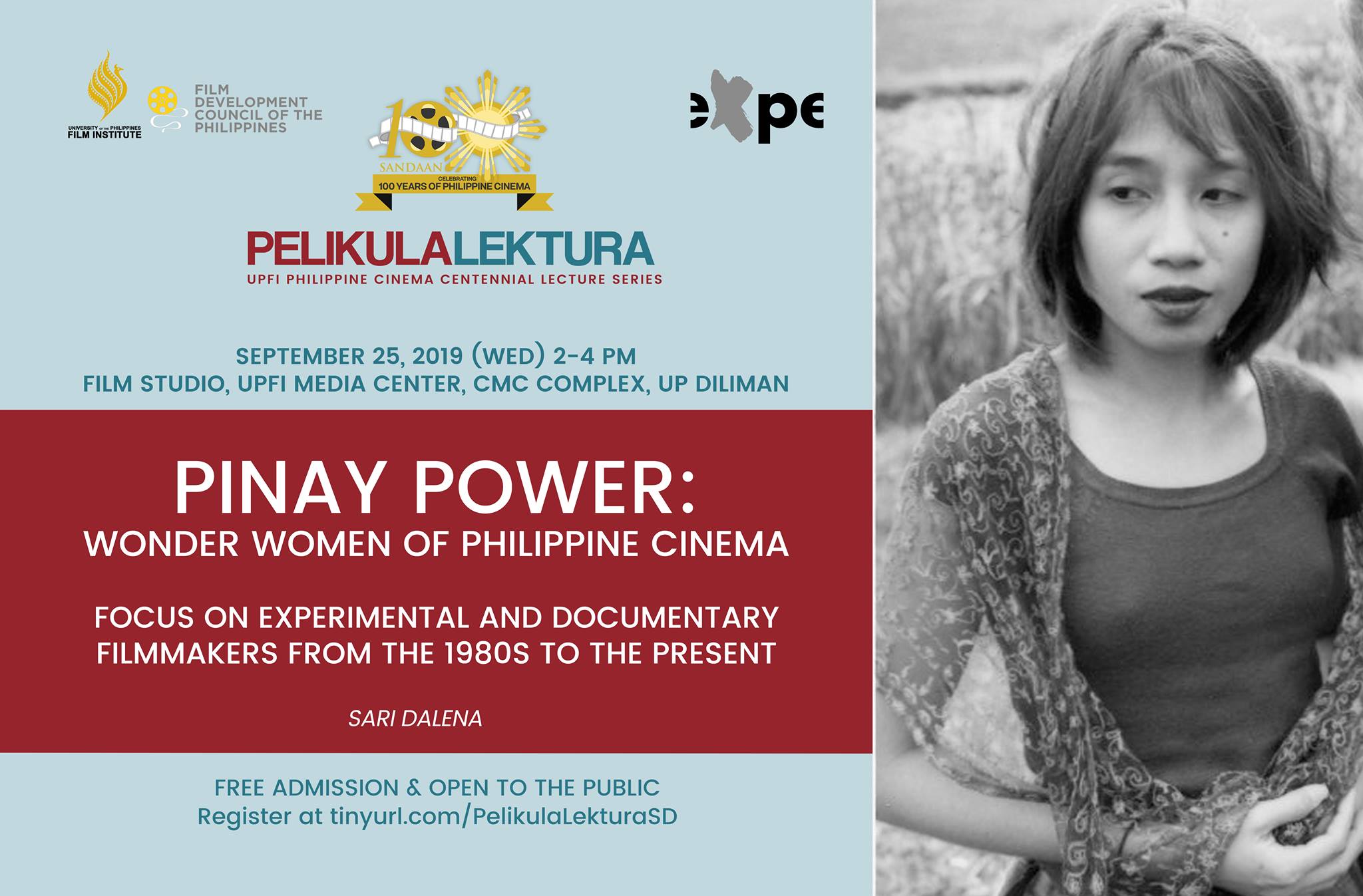 In partnership with the Film Development Council of the Philippines, the UP Film Institute‘s Pelikula Lektura resumes this September with award-winning filmmaker and former UPFI director Sari Dalena as she delivers a lecture spotlighting on Filipino women filmmakers.

Admission is FREE and open to the public.

Title:
PINAY POWER: Wonder Women of Philippine Cinema
Focus on Experimental and Documentary Filmmakers from the 1980s to the Present

Abstract:
Celebrating the women filmmakers from each decade who dared to carve their filmic spaces in the experimental and documentary genres. Focusing not just the subject of women onscreen but exploring the complexity of their presence behind the camera. The paper and audio-visual presentation will locate gender in the space of Alternative Cinema and the diverse cinematic language explored by women film directors.

Bio:
Sari Dalena is a filmmaker and educator. She graduated from the University of the Philippines in Diliman with an undergraduate degree in Film and attended the 16mm Experimental Film Workshops at the Mowelfund Film Institute. Dalena pursued higher studies and obtained her Master of Fine Arts (MFA) degree in Film Production at the New York University through a Fulbright Scholarship. She was the recipient of the Asian Cultural Council Fellowship and Tisch School of the Arts (TSOA) Graduate Fellowship.

Her short films “Asong Simbahan” and “Mumunting Krus” won Best Short Film prizes at the Gawad Urian. Dalena has also been the recipient of the prestigious 13 Artists Award at the Cultural Center of the Philippines in 2000.

Dalena’s films have been screened in numerous local and international film festivals, exemplary of which are “Memories of a Forgotten War” (2001) and “Rigodon” (2006), both films screened at the Museum of Modern Art (MoMA) in New York City. Her films have been shown in Rotterdam Int’l Film Festival, NY Asian American Film Festivals, the Smithsonian, Anthology Film Archives, Queensland Art Gallery, Gallery of Modern Art, and the Lopez Museum.

Ms. Dalena received the UP CMC’s 1st Glory Award for Excellence in Film and has served as Director of the UP Film Institute.