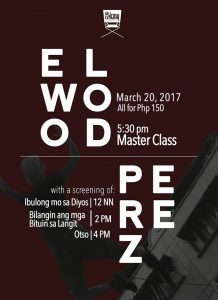 Elwood Perez is a director and writer, known for "Bilangin ang bituin sa langit" in which he was awarded Best Director at the Film Academy of the Philippines Awards (FAP Awards) of 1990 and the Filipino Academy of Movie Arts and Sciences Awards (FAMAS Awards) of the same year. The film was nominated at the 1990 Gawad Urian Awards for Best Direction. He also won Best Director for "Ang totoong buhay ni Pacita M." at the 1991 Metro Manila Film Festival, FAMAS Awards of 1991 and FAP Awards of 1992. His film "Ibulong mo sa Diyos" also won Best Director at the 1989 FAMAS Awards. His film, "Esoterika: Maynila", won the Film Critics Choice Award at the 63rd FAMAS and was the opening film for the 22nd FACINE Film Festival. 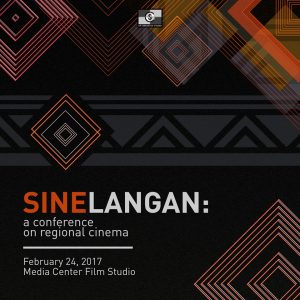 Not many people can pinpoint the exact origins of regional cinema. It is even more difficult to articulate its complex relationship with national cinema. But one thing is for sure: it provides a whole new dimension to the shaping of Philippine cultural identity.

SINElangan: a Film Conference on Regional Cinema will be held this February 24 from 9am to 4pm at the CMC Auditorium, where we will not only paint a picture of the birth of regional cinema, but also touch on how it, too, gives birth to a unique diversity within contemporary cinema.

Japan Foundation Exchange Program for Film Students...and Action! Asia #3 will take place here in the Philippines from Feb. 26 to March 10, 2017. UPFI will be selecting three film students (currently enrolled) who are interested to participate in the Exchange Program.

-Richness and Diversity in Culture

Please submit a (1) Letter of interest to participate and (2)

Application form (Form B) no later than Tuesday, Sept. 6