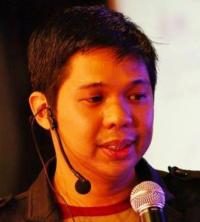 Patrick F. Campos is a film scholar, programmer, and educator. He is currently the director of the University of the Philippines (UP) Film Institute as well as the Office of Research and Publication of the UP College of Mass Communication (UPCMC).

As a film scholar, he has authored The End of National Cinema: Filipino Film at the Turn of the Century (2016), a finalist at the National Book Awards for Best Book on Art. He is also co-author/editor of Communication and Media Theories (2014) and co-editor of the Media and Communication Book Series of UP Press. His other scholarly works have been published as book chapters in anthologies such as Direk: Essays on Filipino Filmmakers (2018), A Philippine Film Reader: History and Criticism (2014), and Global Makeover: Media and Culture in Asia (2008), and as articles in journals like Kritika Kultura, Daluyan, Philippine Humanities Review, Philippine Studies, and Situations.

He is editor-in-chief of Humanities Diliman and managing editor of Plaridel: A Philippine Journal of Media, Communication and Society, for which he edited the special issues “Politics in Mainstream, Underground, and New Media” (2014), “Southeast Asian Horror Cinemas” (2015), “Intellectuals, the Public Arena, and the Nation” (2016, 2017), and “Korea Crossing Cultures” (2017).

As a communication educator and advocate of media literacy education, he conducts media and film literacy workshops throughout the country. With the same advocacy, he has served as workshop director for the UP Film Center and the UPCMC and as representative of the education sector in the cinema committee of the National Commission for Culture and the Arts (NCCA). He has also authored books on communication and media and information, namely From Cave to Cloud (2016) and Creating Communities (2018).

He was a fellow of the J. Elizalde Navarro National Workshop on Arts Criticism and the Kritika National Workshop on Art and Cultural Criticism and a visiting professor at the University of Shizuoka, Japan. He is a research associate at the Dynamics of Religion in Southeast Asia (DORISEA) Research Network, Germany, a Philippine representative to the Association for Southeast Asian Cinemas (ASEAC), and a co-organizer for ASEAC's biennial conference.

He is a member of the Manunuri ng Pelikulang Pilipino, which hands out the annual Gawad Urian, and a jury member of the revitalized FAMAS in 2018.

He teaches courses on film theory, criticism, and history at the Film Institute of the University of the Philippines, Diliman.