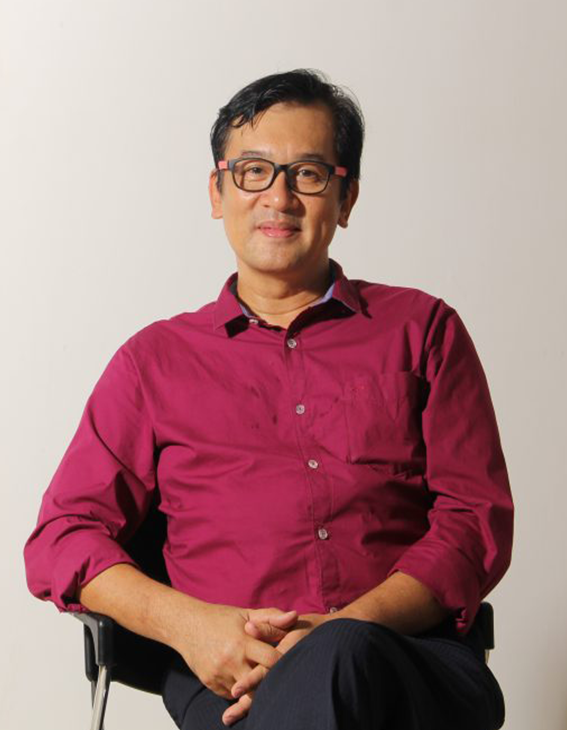 He graduated cum laude with a bachelor's degree in Theater Arts at the University of the Philippines (UP) in 1981. Under a Fulbright Scholarship Grant, Deocampo earned his Master of Arts degree in Cinema Studies at the New York University in 1989. He was also a French government scholar at the Atelier du Formacion Au Cinema Direct in Paris, where he received his Certificate in Film in 1982. He received another Fulbright grant as an international senior research fellow at the U.S. Library of Congress in Washington, D.C. in 2001. Among his many scholastic distinctions are: Scholar-in-residence, New York University; Artist-in-residence, Walker Arts Center (Minnesota); Chancellor’s Most Distinguished Lecturer, University of California, Irvine; International Fellow, University of Iowa; International Fellow, Japan Foundation; Travel Grantee, Asia Society (New York); Fellow, British Council; Asian Public Intellectuals (API) Fellow, The Nippon Foundation; and Recipient of a research grant from the Sumitomo Foundation.

He was named one of the Ten Outstanding Young Men of the Philippines in 1992. A year later, he was recognized in Japan as one of the Ten Outstanding Young Persons of the World. His contributions were honored with a Lifetime Achievement Award from the Filipino Academy of Movie Arts and Sciences Awards (FAMAS), and a Lamberto Avellana Award from the Film Academy of the Philippines. His prizewinning film and video documentaries span more than thirty years, covering varied themes from life under the military dictatorship to film history and environment. His breakthrough film, Oliver (1983), is considered a classic in Philippine documentary. He was commissioned by The Nippon Foundation to make the six-hour documentary series on the Asian environment, Cross Currents: Journey to Asian Environments (2011). He is presently producing a ten-hour documentary series on the one-hundred year history of cinema in the Philippines, a series that already includes the colonial cycle in Philippine cinema, covering the Spanish, American and Japanese occupations.

Deocampo authored and edited several books on cinema history: Short Film: Emergence of a New Philippine Cinema (Communication Foundation for Asia, Manila 1985), Beyond the Mainstream: The Films of Nick Deocampo (Winner, National Book Award for Screenplay from the Manila Critics Circle, 1997), Lost Films of Asia (commissioned by the South East Asia Pacific Audio-Visual Archive Association and published by Anvil Publishing, Inc., 2006), and SineGabay: A Film Study Guide (Winner, National Book Award from the Manila Critics Circle and published by Anvil Publishing, Inc., 2008). He is currently working on a five-volume history of Philippine cinema. Its first installment is Cine: Spanish Influences on Early Cinema in the Philippines (Manila: National Commission for Culture and the Arts, 2003), which won another National Book Award in 2003. The two subsequent volumes include: Film: American Influences on Philippine Cinema (2011) and Eiga: Cinema in the Philippines during World War II (2016), both published by Anvil Publishing, Inc. The next two volumes will focus on the histories of alternative Philippine cinema and the Philippine movie industry. Several of his articles have been published in international publications, such as: Encyclopedia of Early Cinema, edited by Richard Abel (Routledge Press: London and New York), Vestiges of War (The Philippine–American War and the Aftermath of an Imperial Dream, 1899-1999), edited by Angel Shaw and Luis Francia (New York University Press, USA), Queer Looks, edited by Martha Gever, John Greyson and Pratibha Parmar (Routledge Press: London and New York), Documentary Box, published by the Yamagata International Documentary Film Festival (Japan), Making Documentaries and News Features in the Philippines, edited by James Kenny and Isabel Enriquez Kenny (Anvil Press, Philippines).