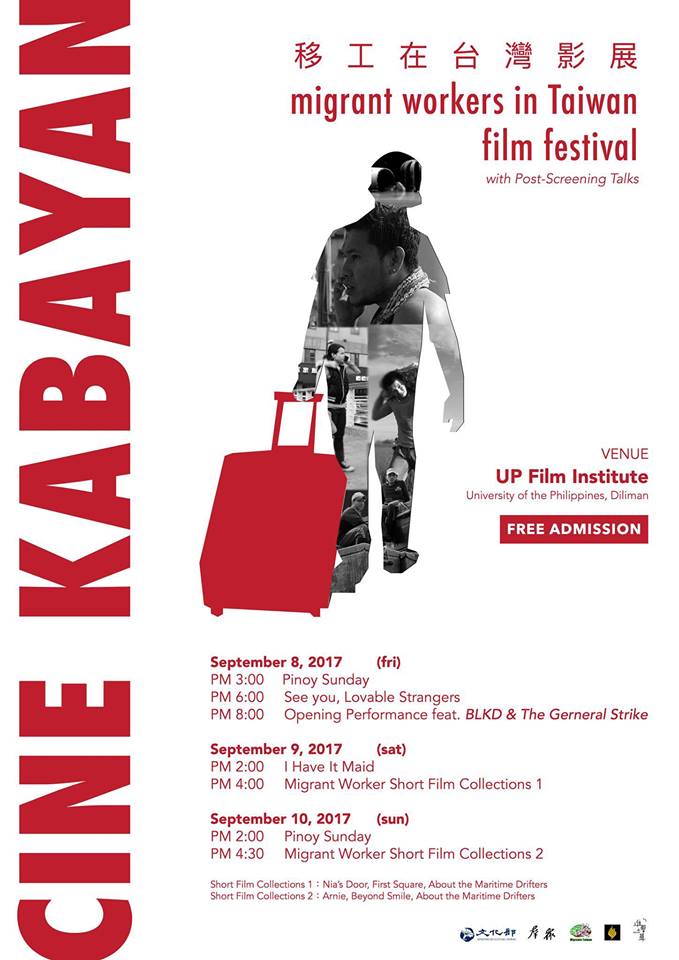 CINE KABAYAN:Migrant Workers in Taiwan Film Festival is a three-day free event, presenting films and documentaries about the situation of the “Bagong Bayani” in Taiwan.

Despite being called as “Treasure Island”, Taiwan is also known with the name “ Bitter Prison”. For more than 20 years, Taiwan has officially imported workers from the Philippines and other Southeast Asian countries as supplementary labour. Until today, the number of migrant workers has surpassed 2.5% of the population of 23.5 million in Taiwan. While they are hoping for bringing a better life for their family, the reality, however, has muted them with layers and layers of exploitation.

The film festival will include 3 full-length films and 4 short films, providing you with a glimpse of the bittersweet life and the struggles of the migrant workers.

“Pinoy Sunday” is a comedy of two OFWs’ fantasy and adventure in the city of Taipei. The two documentaries “See you, Lovable Strangers” and “I Have It Maid”, both directed by foreign directors, reveal the dilemma of migrant workers who had no choice but to run away from their dire working condition. For “Arnie” and “About Maritime Drifters”, the two short films depict the life of fishing workers.

While “Nia’s Door” and “Lovely Sunday” depict the loneliness and sacrifices of the female migrant workers. Lastly, “Beyond Our Smile” is a story of a migrant who fights for the rights for her fellow Filipino who work abroad.

After the screenings, we will invite activists serving for migrant workers from Taiwan and the Philippines, film directors and the project core team will share their experiences on their professional or relevant background, in the hope of creating in-depth discussions and exchanging ideas from both sides.

** All are free Admission and with post-screening discussion **